Yesterday we had a synchro halloween party. The thing that really brought my attention was the pumpkin carving. That was the first time I’ve ever carved a pumpkin. In the past years, it was my dad that did the carving. They were just regular jack-o-lanterns. Triangular eyes, a triangular nose, and crooked teeth, big deal. But this one, holy macaroni! It’s a haunted house! No, take that back, an epic haunted house!! It’s pretty easy to carve. You choose a design from this book then you rip out the paper and tape it to the pumpkin. After that, there are little tiny knives that come with the kit. Take those and cut along the lines. When you are done, rip of the spaces and push out the spaces like usual and… boom! Enjoy your jack-o-lantern! I had to take mine home because it was so complicated. The difficulty level was the highest. Everybody was doubting me but, ha! I made it didn’t I? and it turned out WICKED! The second best part was the games. This girl named Calista is like, the best game leader in the world! We could play with boring barbie dolls and it’ll still seem fun because Calista is leading us. She’s a really good role model. We played charades, apple to apples, some random game that Calista cooked up, and this untangle game. Last night was AMAZING! The food that everybody cooked was so creative! My favorite one was a brain made out of jello. You take a carved bowl and just dump the jello in there. For those of you who weren’t able to come, I feel for you!! 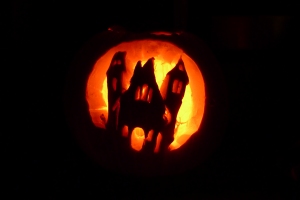 This entry was posted in My Writings. Bookmark the permalink.

One response to “Halloween Party Time!”